Skip to main content
European Network of ... For Orchestras Orchestra of the month
Listen

Orchestra of the Month

From now on the ENUO will monthly put one member orchestra in the spotlights. With this we hope to offer you a peek behind the scenes of how each orchestra is organized, by whom the orchestra is run, what kind of programs have been played and are to be expected in the future etc. Apart from the only criteria that all information should be in english, we give the member orchestras the complete artistic freedom to present their orchestra and university with an open mind towards future collaborations within the ENUO. Do you think your orchestra should be the next on stage? Contact us via info.enuo@gmail.com and find out when you will be next.

The University Oviedo Orchestra was founded in February 1979 by Alfonso Ordieres, from then onwards considered being the oldest university orchestra in Spain. Originally it was a string-based orchestra that focused on baroque repertoire. In its first chapter, the orchestra gained a good reputation and took part in several festivals and courses such as Cambrils, Granada, Madrid, etc. In addition, the orchestra got invited to perform for Spanish Kings at the foundational act of Fundación Princesa de Asturias in 1980. Also, some concerts have been broadcasted on the National Spanish Television (TVE).

After several years of non-activity, Pedro Ordieres started as conductor. So since, October 2017, Orquesta de la Universidad de Oviedo is considered to be a full-size symphonic orchestra with more than 70 enrolled students. Today, each term is musically colored with ten concerts. With it is main purpose to promote classical music also comes premiers by composers such as Gabriel Ordás, Pablo Moras, Guillermo Gonzalez, Fernandez Languasco o Ruben Díez. Also, it has recorded the original soundtrack to a documentary produced by TPA “Desde la otra orilla”.

The University of Oviedo Orchestra is part of the “University Extension and International Promoting service”.  The activities are organized according to the needs of the University’s community, but also contributes to the irrevocable and tangible commitment it has with the whole Asturian society, encompassing all kinds of cultural and formative activities. This Orchestra tries to bring culture to Asturias society as well as give the chance to the students to develop its artistic ideas. The Extension University department has made a big effort to support the orchestra for the past years.

The Orchestra rehearses on Mondays and is open to any student, professor or worker associated to the University of Oviedo. Also, some students from regional Conservatoire are invited to take part and extend their musical experience. The orchestra sometimes collaborates with guest professionals from Asturias Symphony Orchestra and other institutions, they sometimes perform as soloist or share their professional knowledge by giving advice to the students.

Upcoming projects include three concerts: one for Asturias Television at the historical cellar from “El Gaitero”, and one big Concert at the Oviedo´s cathedral, including Beethoven´s fifth symphony (celebrating Beethoven´s anniversary) and the world premiere of “El Aura” by Gabriel Ordas together with University of Oviedo Chorus and Asturias Conservatory Chorus. Later this year the Orchestra will perform at Alcalá de Henares University (Madrid) as part of an exchange program between both University Orchestras. Only exciting things ahead!

GUSO, or the 'Ghent University Symphony Orchestra', is an orchestra for and by students! It explicitly presents itself as an open and social orchestra, a group of close friends with the ambition to realise qualitative and musically ambitious projects, creating the opportunity for students in Ghent to further explore their musical interests. In line with the Ghent University slogan “Dare to think”,  GUSO “Dares to play”, with a lot of musical enthusiasm and the guidance of their passionate conductor Steven Decraene. Take a look at www.guso.be or visit our facebook page and follow us on Instagram for more information! 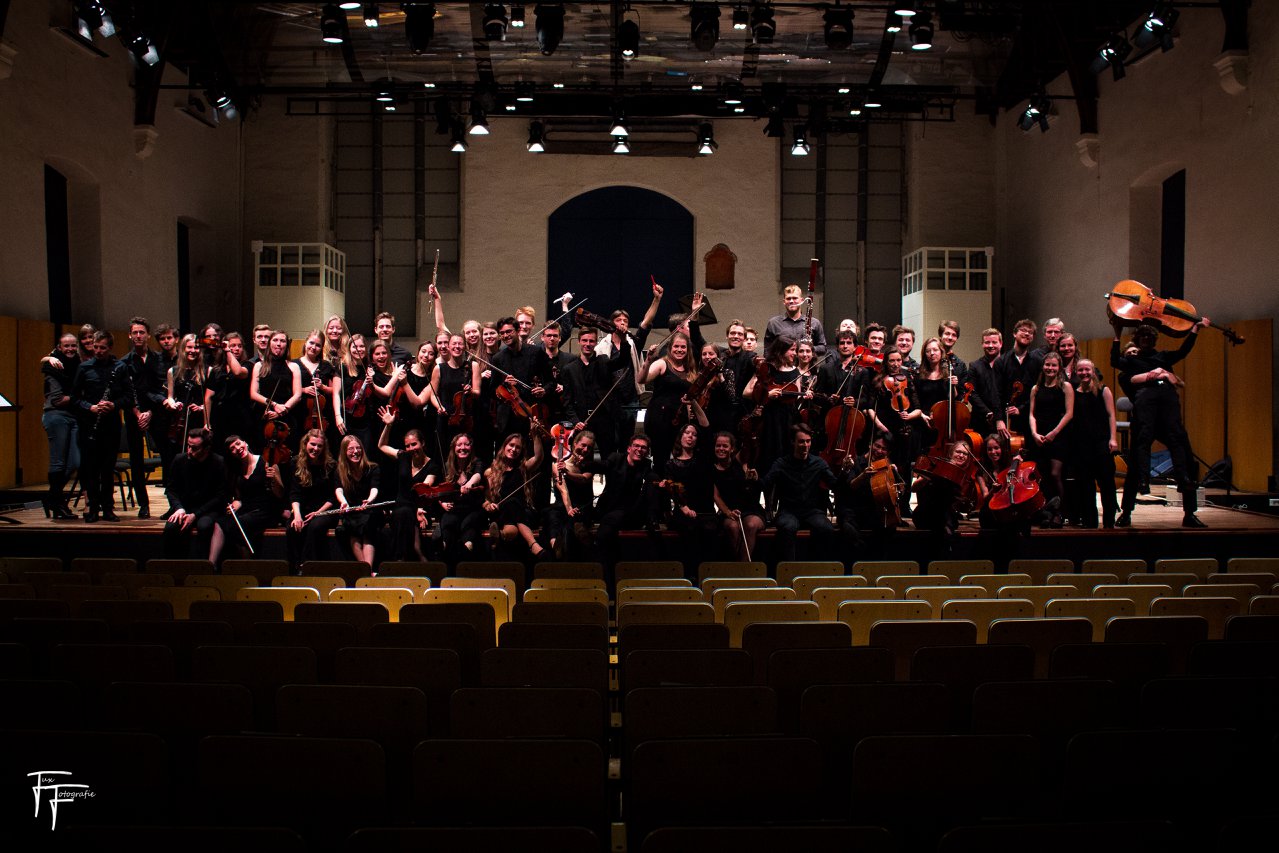 The UCD Symphony Orchestra was founded in 2002. It has developed into the flagship instrumental ensemble of Ireland's largest university, University College Dublin, with a membership of around 90 players. It offers student scholarships and can be taken for academic credit irrespective of degree programme - traditionally there has been a large cohort of medical and engineering students in the orchestra. Sectional tuition is provided by principals from Dublin's two full-time professional orchestras, the RTÉ National Symphony Orchestra and the RTÉ Concert Orchestra. The orchestra has engaged in numerous joint projects with university orchestras outside Dublin, the first European destination being Mannheim, Germany in 2013. Connections made via our friends in the ENUO have led to further collaborations with orchestras from Uppsala in Sweden, Leuven in Belgium, and Strasbourg in France, as well as participation in the 2017 edition of ESOF.

The UCDSO’s repertoire centres on mainstream concert works from the 19th and 20th centuries – major symphonic symphonic repertoire performed has included symphonies by Beethoven (5, 7, 9), Shostakovich (5, 10) and Tchaikovsky (4, 5, 6). Since 2005, the orchestra has appeared annually at the National Concert Hall in Dublin, Ireland’s premier classical music venue. These concerts often involve the UCD Philharmonic Choir, most recently in performances of Brahms’s Deutsches Requiem and Borodin’s Polovtsian Dances. A wider audience has been cultivated by a number of themed concert series, such as family concerts, a "Night at the Movies" series, and concert performances with live bands, including the world-renowned tribute act the Bootleg Beatles.

The orchestra shall enjoy a very busy season in 2019–20 with five major events planned, the first of which occured on October 20th, joining forces for a second time with the Bootleg Beatles for an acclaimed performance to commemorate the release of the iconic Abbey Road  album – a review in the national music journal Hot Press can be read here: http://tiny.cc/ucdbeatles. Next up is the second in the series entitled "Closer Reading" in which a major symphonic work is performed following a 30-minute critical introduction by our conductor, Dr Ciarán Crilly, who is also Head of the UCD School of Music. Into 2020, there are two performances planned at the National Concert Hall, including the fourth "Night at the Movies" programme, before we welcome the Strasbourg University Orchestra for a joint concert in the Spring. A new endeavour this year is the introduction of an apprenticeship for young conductors: the 2019-20 Conducting Apprentice is Ben Jacob from Waterford in the South East of Ireland.

As the orchestra approaches its 20th anniversary in the 2022-23 season, it looks for fresh challenges, and is always open to exchange partnerships with other ENUO members. We celebrate the fact that we have grown from just 19 members in our first concert to 90 in our last, and that this growth has been accompanied by an ever-increasing contribution to the cultural life of UCD’s staff and student population.

Definitely keep an eye on what we are up to via our main channels: www.ucd.ie/orchestra and www.facebook.com/ucdsymphonyorchestra 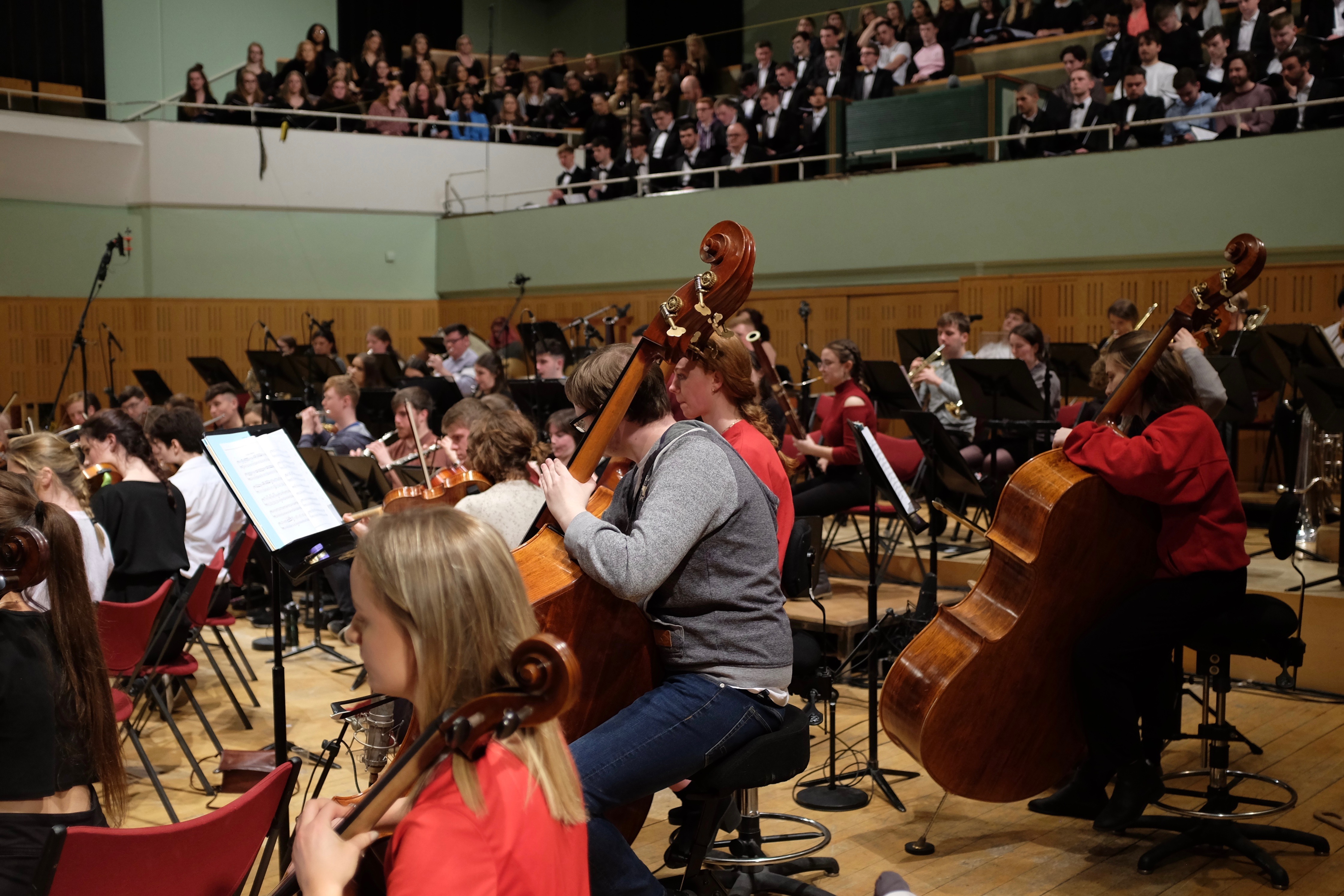 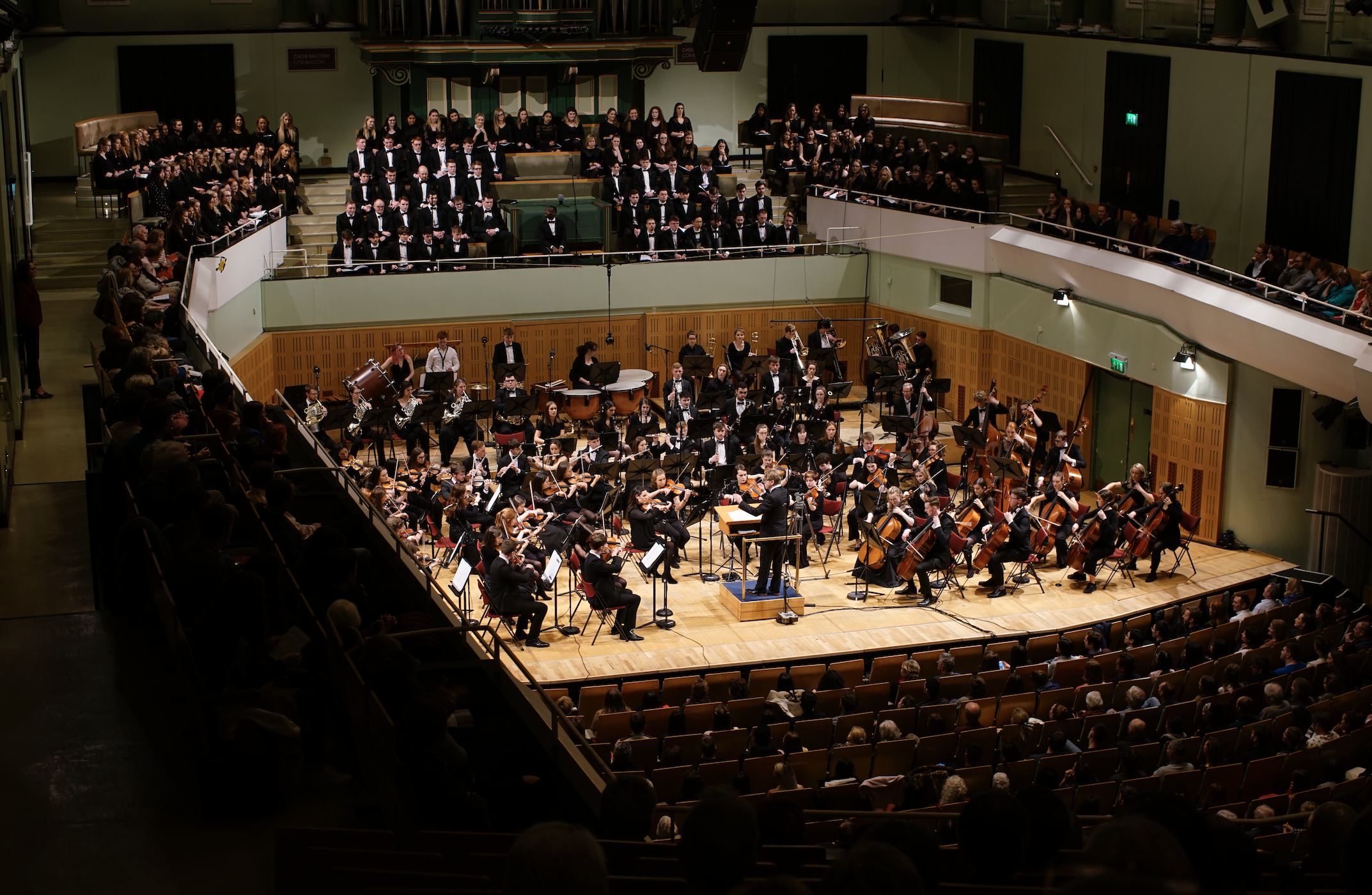